Taking up where I left off the other day…part two!

If you haven’t read part one…you really should… [here]

As we were counting down the days until our first “face-to-face” meeting…those weeks seemed like forever away, although looking back the time did fly.  The weeks clicked by…as we continued to write and talk…we became more anxious to meet!  The day finally came where we met face to face for the first time! Yes we were nervous at the same time it just seemed so right!  We spent the week together working on projects, spending time with family, getting to know each other over coffee dates and just enjoyed being together!  I knew the week would either fly by or be really slow…and of course it flew by!  Thursday morning before he was to leave on Friday he had breakfast with my dad and told him his intentions and where he wanted to take our relationship…they had a good talk [from what I hear!!] and talked about a lot of the facts about our relationship.  One being our distance and if God did allow this relationship to develop then there was the question of where we were to settle.  There or here…it was a very real question that we both had already begun to talk about and discuss.  I think we were both totally willing to do what God wanted us to to do and where He wanted us to go.  On Friday morning we had a little last coffee date at a cafe here in town…we sat there looking at each other and asking each other where we saw our relationship going and what our next step would be.  There was some silence, just not knowing…

I can clearly remember him telling me he knew God had him in Lee, Maine for a reason and at this point God had not told him to leave…but he knew it would be a big move for me and that God would have to be in it, either way.  His very next statement to me was…I think we should take some time to pray about this and seek the Lord on the direction He would have us go.  I agreed…I really didn’t think this first good-bye would be hard because “after all we had just met, right?”.  Well little to my surprise it was hard, because in my heart I knew where this relationship was going…at the same time I didn’t because there were so many questions still lingering in my mind.  I knew God would have to work…I knew God would work it out…I just didn’t know when or how!  This is where we both knew we had to trust the Lord to lead and guide us and for us to be willing to follow whatever the Lord had for us.  As he left and we said good-bye…it was hard… not knowing when or if I would see him again, I just didn’t know, yet God gave me a peace.  A peace that He mentions in Phil 4:7- the peace that passeth all understanding.

As Bern traveled home, we talked on the phone a couple of times…talking about the reality of where we were…the season in which God had us in and just simply trusting the Lord.  We just took this time and weekend to pray and seek the Lord, again all while the Lord was increasing our faith in Him, because we didn’t know when He would give direction.  We both knew the Lord would have to clearly give definite direction in this next step.

On Monday Bern was back at home…back to work in his normal routine…Monday I was back at home in my normal routine of work.  Life was back to normal might you say.  On Monday afternoon Bern sent me a text… “Wow! God works in mysterious ways, I can’t wait to tell you about it tonight”. So I patiently waited for him to call that night…of course all afternoon I kept trying to figure out what might have happened…I knew I could never really figure it out, but I tried.  Yep sure enough…I was way off track!   I can remember him telling me “well it looks like God has begun to answer our prayers…”  That afternoon he found out that the international boarding school where he worked and was a dorm parent, decided not to offer him a new contract  for the upcoming 2013-2014 school year.  They knew he was wanting out of being a dorm parent and that was their primary need.  He was simply shocked…yet immediately knew what God was doing, answering our prayers for us, in a way we never dreamed, nor did we ever dream this fast!  So now at this point his options were endless…knowing that there in Lee, where he lived, there wouldn’t be any other work options for him…so this opened up our door even wider…of where does he begin to look for a position for the coming year!  It seemed like at that point his options were completely endless!  It was quite over-whelming…knowing God had closed the door for him in Lee…yet not knowing what door God would open and have him go.  He had a few contacts he began to pursue…Maryland…Florida…Maine…nothing seemed to be “clicking”…God just didn’t seem to be opening doors…he asked if there were any private schools down here…he really wanted to get into a Christian school.  I had remembered that there was a school about 45-minutes away that I had been told was looking for a Physics/Chemistry teacher.  I mentioned Northlake Christian School to him…he looked them up and sure enough they were still looking.  He was thinking about applying, just to see what doors would open/close…at the same time I made a few contacts on my end with some friends that either had taught there or their children attended the school.  We were told he should apply quickly…so I think Wednesday or Thursday of that week he decided to apply…once he applied he heard back from them that evening.  They had a few questions…as it seemed odd for someone from Maine applying in Covington, Louisiana!!!  He was able to answer their questions and they asked for him to do a Skype interview the following week!  He was a bit nervous about the whole Skype idea, as he had never really experienced Skype!!  I was happy to help him out!!!!!

We laugh about our first skype call, to this day!  I had used it a lot with my mentor program…so I was loving it, seeing him and talking!  He was a bit unsure about this!  He liked the fact we could see each other…but it was still a bit awkward for him!  Over the next couple of days we warmed up to skype and it became a permanent asset in our relationship!!!!  Back to the interview- it went good and they asked about giving him an excuse to come down for a face-to-face interview!  Of course he was happy to do that!!!  They scheduled his official interview for the end of May…so here we found ourselves counting down the weeks or rather days once again…God was faithful during this time to continue to lead and guide us.  He continued to show himself strong to us and answer prayers along the way.

It was during these days that Bern “stumbled” across this song…which after he read the words and knew this song was simply for us…he shared it with me…then emailed it to me.  It just seemed so fitting for us!  I’ll share it with you now… 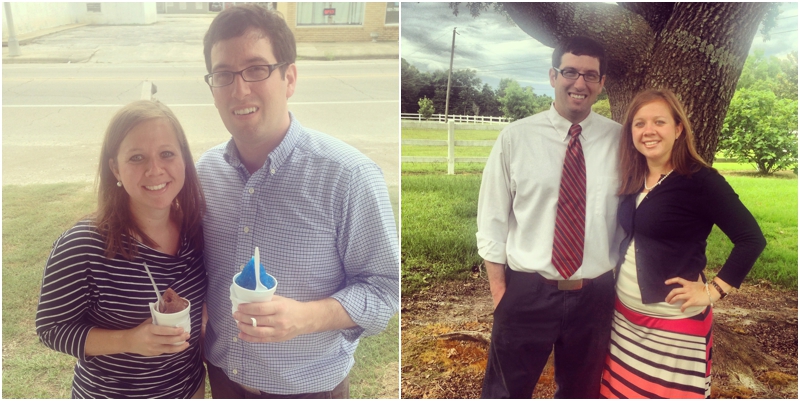 As our time between these visits passed…we had a lot more phone calls and Skype dates…ending our time of writing!  Through these days we were able to see God work…we were definitely falling for each other more and excited to see what our future would hold.

Our end of May/beginning of June visit went really well.  He flew in on a Thursday and had his interview scheduled for Friday.  His interview went well and he was hired…we were thrilled and he was even more excited after seeing the school, hearing their philosophy and ministry.  God opened up the door for him to also teach a pre-engineering class along with the physics and chemistry!  After his interview he knew his next step was finding a place to live when he moved down mid July.  Again…he was on the search…doors closed and nothing.  I called a neighbor who owns duplexes…we searched…and then he found a place through my brother in law in Slidell.  That, yet again, was another thing checked off his list for the weekend.  During this visit…we again worked on projects together.  VBS was going on at my church, our church was in a transition stage so he and my dad did some work together…it was just another good visit all around.  Although once again as he left we still were wondering what our next step would be and when.  Yet God continually gave me a peace as He built our faith and trust in Him.

As he left…we began planning a visit up to Maine in July.  I was anxious to see his life there as well as meet his family and church family.  We planned a 10 day trip up that way, to help him on some projects at his house that he would be putting up for sale…then we stuck a few days in there for sight seeing and family time.  Now once again with the nature of a long distance relationship we were finding ourselves counting down the days and weeks yet again, until we’d be together.  Skype was a life saver…as now after this visit we barely talked on the phone, it was all Skype!!!  We are so thankful for modern day technology!!!!!!

Part three on the way….