First- if you read this full post I want to know because it’s extremely long-winded! 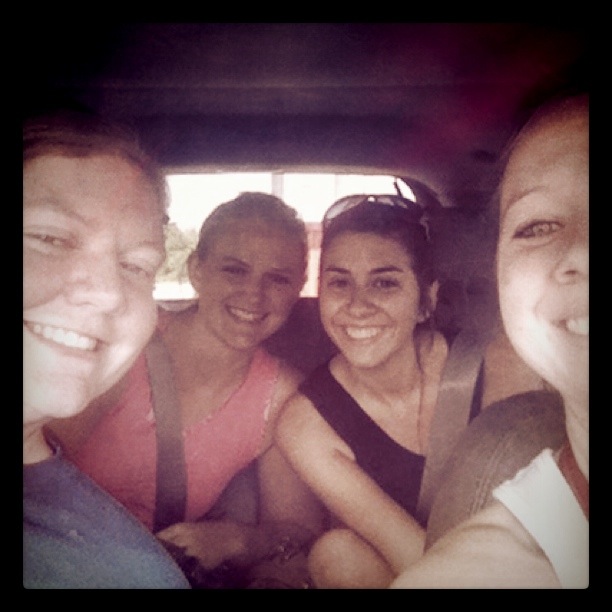 Week before last I headed out on a day canoe trip with three other friends. I was so looking forward to the day off and being out in God’s creation having good conversation and being away from the cell phone and computer! We all met up at my house at 8am to load up and head up to the Okatoma. We were all packed…towels…lunch…snacks…water…towels…change of clothes- “just in case”…diet coke in toe for some…sunscreen on and we were ready to roll. The hour and a half car ride went by super fast- a huge thank you to Eden for keeping us entertained…many laughs and good conversations and we were there! We were pretty excited-as we drove up there were about two bus loads of teen agers trying to check in at the same time- I was like oh great…but hey that’s what makes adventure fun! right?!?!

As we were paying and registering at the front desk the owner was trying to convince us to rent kayaks instead of canoes. He said they would be much easier than a 17 foot aluminum canoe with two girls in each. We had to make a decision…the kayaks were twice the price but supposedly easier…the decision was left to the oldest in the group- which so happened to be me…yes me. Well we made an executive decision that since we came to go canoeing that’s what we were going to do and just go with it…adventure and all. Little did we know what we were asking for! 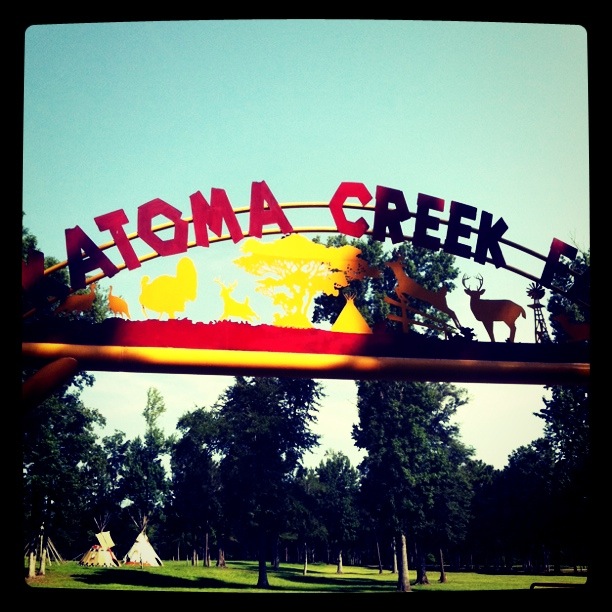 As we gathered out baby coolers- left our phones in the car…but a set of car keys in each cooler we loaded up in the old yellow bus that took us through an old country town and dropped us off under a bridge by the water to begin our trip! Here we go—the other 5 bagillion kayak-ers or canoe-ers were right there with us trying to load coolers and get situated…Stephanie made the decision that she would steer and sit in the back and I was in the front. Okie-dokie sounded good to me…neither one of us were pros but we were up for the adventure and fun and that’s exactly what it was. I got up at the front- had our baby cooler in toe life jackets to sit on and we were ready…well besides one thing I realized we had no paddles. Sooooo Stephanie runs a couple of yards up and grabs our paddles and we were ready…a nice gentlemen offers to push us off into the water and we were off—headed straight for the other side of the bank into the bushes…as I’m dying laughing…trying to holler that we need to go left….and well hello bushes. Once we got it figured out and turned around we were off to a decent start- considering. Melody and Eden had paddled along down the bend and were a bit ahead of us.

Stephanie and I were doing pretty good…I was giving directions- Right- Left- other left- Straight…then we came to a point we really needed to go right—riiiighhhhttt–RIGHT—RRIIIIGGGGGHHHHTTTTTTTTTT well hello bushes again right in my face and we flipped…yep we won the prize for flipping not even 500 yards away from our send off spot!! Once we got over our dying laughing and catching our paddles…vests and baby cooler we were in a pickle. Our canoe was FULL of water…so ok we turn it over empty it continue turning it and it’s full over water…same old cycle….in my mind I knew we couldn’t sit there and scoop the water out…I’m standing in water up to my chest because I’m only 5 feet tall—wondering what we are going to do because that would take us all day long. I look up the river and there are four girls about our age headed towards us and asked if we needed help—we were like ummm Yeh! They were girl scout leaders and knew how to rescue a boat- as they call it. Two of the girls hopped out of their kayaks jumped in the water and helped us. They flipped it over…got up under it with the help of Stephanie they lifted it up and turned it over to keep the cycle of water filling it up from happening again. They were gracious enough to help us get back in the canoe and see us off. As we situated ourselves again…laughed and figured things out we turn the bend and there Melody and Eden are sitting on a sand bar waiting on us…ahhhh. We rested for a minute and watched Eden and Stephanie to the crazy of jumping off of the “cliff” from a rope swing into the water! Melody and I decided we were the ones with the “heads on our shoulder”…whatever that means.

We continued down our 7 mile trip–laughing and having a good time…reminding ourselves we’re on an adventure. Then it dawned on me…I laughed hysterically…our paddles are weird in this canoe…well yes…Stephanie had grabbed kayak paddles not canoe paddles…the difference??? kayaks have a paddle on each end…canoes have one… Well again we were just providing free entertainment to those around us…you should have been there!!! We made it down a couple of “water falls”…made it over lots of rocks because the water was low…ended up walking over lots of rocks pulling and pushing the 17 foot aluminum canoe we were advised not to get…oh well what are ya gonna do now??!?!

The last waterfall was a “big” one. Stephanie and I were going to embrace it and take it…only to our surprise- the current in the water decided to push us up on the rocks—start turning us side ways and pushing us down the fall backwards…I knew over my dead body was that happening! So some tough teen age guy- who I made him believe he was a tough…strong guy came running up some rocks to “rescue” us! I let him have it all!!!! He got in our canoe and took it down the fall…flipped it but I didn’t care since I wasn’t in it…Then he told us to jump off of the “small” cliff into the water but to be careful–there were some shallow rocks. So I decided to slip into the water and avoid hitting a rock…smart move besides the fact the current was so strong right there that I was swimming like a mad girl and wasn’t getting anywhere…looking back to see myself being pulled back under the cliff I “slid” off of—pretty scary might I say…but by God’s hand of mercy I somehow…literally I can’t remember but somehow got out of the current…I can swim…and I was swimming hard with everything I had and getting no where…thankfully about that time the teen age guy came over with the canoe because I think he saw what was going on and I climbed up in it and we got out of there…my oh my! Praise the Lord!!!

After Eden doing some crazy jumping we decided to continue…we were hoping we were about to the “finish line”! Every bend would go around I would holler— “Faiiiiirrrr Chilllldddd”…nothing was happening…another bend…”Faiiiirrrrr Chillldd!!!” hoping our destination would come to me since I felt like we sure weren’t getting close to it…low and behold Stephanie and I flip AGAIN…thanks to me…but this time it was shallow and we were all good! We finally saw Fairchild in sight and were very happy!

After a few bruises…noticing a few spots where I missed sunscreen…nasty hair…sore shoulders and arms…wet clothes…and fun memories our 7 mile canoe trip or adventure might you say was complete!  Thank you Eden, Stephanie and Melody for such a fun day! 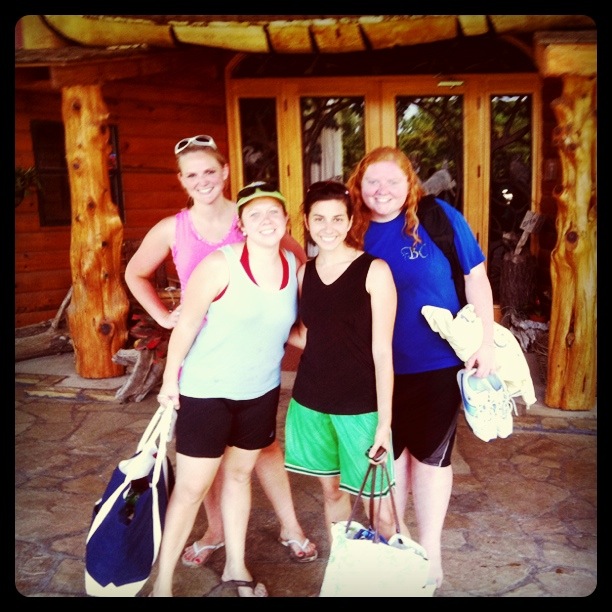